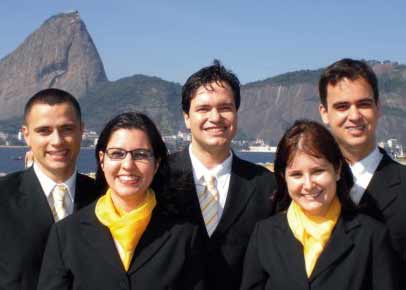 The GSE team leader is Fábio de Oliveira Fagundes, 32, a member of RC Maracanã. He is the first Paul Harris Fellow of his club and president of the club’s Rotary Foundation Committee. On the district level, he is Rotaract coordinator, RYLA coordinator and member of the Matching Grant Projects Subcommittee.

He majored in cartographic engineering in college and completed post-graduate work in computational and systems engineering. His research areas are high performance computing and information security. Since January 2007 he has been working for Transpetro, the Petrobras Company in charge of transporting crude oil, fuel, natural gas and ethanol using ships and pipelines. As a cartographer, he is now in charge of the Geographic Information System initially designed to support the pipeline integrity division.

His hobbies are trekking, soccer, basketball, volleyball, running and rowing.

He hopes this GSE program will result in cooperation between both districts, especially with matching grants projects.

Other team members are:

• Anderson Rodrigues, 25, who will complete his management degree at the end of 2008 at UFRJ – Universidade Federal do . He likes all kinds of sports, mainly soccer, running, biking and swimming. He works at Ernst & Young, an advisory and auditing company. During the Group Study Exchange, he would like to visit some consulting and auditing companies that provide process and risks advisory services and internal auditing services (such as Ernst & Young, PWC, Delloite and KPMG). He also is interested in visiting universities that offer MBAs. He is sponsored by RC RJ São Conrado.

• Ingrid Lins e Silva, 27, who works as a management and marketing consultant. She has a post-gratuate degree in marketing by COPPEAD at Universidade Federal do . She is the past-president of Rotaract Corcovado (2007-2008). Ingrid loves pets, nature, books, Japanese food. She also likes singing. Her favorite sports are the ones related to nature like snorkelling, hiking, rowing and horseback riding. She hopes to learn about the local infrastructure, culture and habits in the , and would like to contact clubs interested in future projects with matching grants. Professionally she would like to meet entrepreneurs to discuss their leadership, difficulties and successes. She would also be interested in visiting universities that offer MBAs. She is sponsored by Rotary Club of Botafogo.

• Maria Antonieta Cortezzi, a 25-year-old attorney who works in a law firm. She graduated late 2006 and her main practice area is real estate and business/corporate law. She would like to meet attorneys, judges and prosecutors as well as visit court rooms and law offices. In her personal life, she loves to play sports, especially volleyball, and read fictional/romance books. She’s sponsored by the Rotary Club Leblon.

• Renato Cirne Oliveira Nascimento, a 28-year-old lawyer who works at Oi Telecommunications, a Brazilian telecommunication company. He has been taking a master degree course in Intellectual Property at INPI/UFRJ for the last six months. Renato loves dogs, sports and cultural activities. Professionally, he would like to understand more about how law firms and telecommunication companies operate in the . He is a former Rotary exchange student who stayed in (Ambler Rotary Club). Renato is sponsored by the Rotary Club of Petropolis.