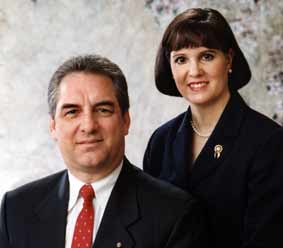 A member and past president of Dearborn Rotary Club, Dearborn, MI., Jim was the centennial district governor for District 6400. He was a trainer at the Zones 22/27/28 GETS/Institute, training district trainers. He also served as an international trainer in San Diego in 2007 and 2008, and as GETS trainer for Zones 27-28 for two years.

Jim traveled to Nigeria in 2001 to participate in the National Immunization Days, and also traveled to South Africa to attend the African Presidential Conference addressing the needs of African Rotarians. Jim and Diane have attended seven Rotary International conventions together.

Jim is executive vice president/co-owner of Rose Pest Solutions and past president of the Michigan Pest Control Association. He is currently the chairman of The Copesan University Steering Council, an online learning portal for an 85-member national affiliation of pest management providers. He has been a soccer coach and assistant Boy Scout troop leader, as well as a volunteer at his church. Jim is a graduate of Lake Forest College, earning a BA in Economics. He and Diane have been married for 27 years and have two sons. Their younger son recently was a Rotary Youth Exchange student to Finland, and the older son traveled to Kenya in December 2007 to work on a Rotary project. The Ives are all Paul Harris Fellows, and Jim & Diane are major donors and benefactors to the Foundation.